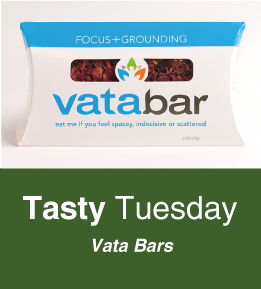 When I was working in global Advertising in New York City, I never seemed to have any time for anything other than meeting and putting out fires. When it came to lunch, I seldom had more than 10 minutes to wrap up my meeting with my team in London before getting on a call with my team in Sao Paulo. I would reach for convenient packed foods – usually a Clif bar and a bottle of water.

Of course, it only got worse when I traveled internationally. Being between time zones and still have to manage a team globally started playing havoc with my health.

For a fleeting moment, I wished that somebody could come up with a convenient packaged food which contained ACTUAL nutrition, instead of mostly sugars and “natural” ingredients.

To cut a long story short, when I came up with the idea for the VedaBars, I wanted at least one of the bars to have real vegetables in them. After all, Vegetables not only contained ACTUAL nutritional value, but would taste great in a formula I developed. I also found out that there were no other products on the market place that offered vegetables in their list of ingredients. The VedaBars are unique, but the VataBar is extra special.

In Ayurveda, Vata is considered scattered, anxious and ungrounded when out of balance. This is because of its dry, light and mobile nature. So if you’re eating dry and light foods, the Vata imbalance gets harder to deal with. Ayurvedic wisdom suggests eating grounding foods, like root vegetables, and foods which have been well oiled with oils like ghee and olive oil

The VataBar is made out of beets, yams, oats, almonds, ghee and maple syrup and nothing else. We will be selling the VedaBars at Tone again soon, but I’d like to dedicate this Tasty Tuesday to my idea of VedaBars – the first Ayurvedic Wholefood bar.

Want to join the discussion?
Feel free to contribute!

June is busting out all over!My Yoga Journey – to be continued
Scroll to top